Eleaf has welcomed another addition to its Nano vape device market that has a similar form factor with its current pod vapes. However, this new baby has a huge open system advantage!

With just the size of 30 mm by 14 mm by 75 mm, the Eleaf iCare is so tiny and light you would not even notice it is actually there. Its size is smaller than a 30-ml e-liquid bottle and barely bigger than a standard USB stick. In fact, this is probably one of the smallest vape devices currently available on the market today.

The Eleaf iCare mod, which is a classic automatic style device, appears smooth and has rounded edges. It has a garish plastic top cap that fairly looks nice into the overall design. It has two airflow holes located in the top cap. When the cap is removed, you could see the air pipe and a rubber bung to help keep the cap in place.

On board the Eleaf iCare is an Eleaf IC 1.1 ohm atomizer heads, with a built-in tank capacity of 1.8 mL. The battery life is short but still good with a simple intuitive three color LED display. The mod is only powered by a 650 mAh battery, which could last through up to 4 hours of heavy vaping already. It has a resistance range of between 1.0 ohm and 3.5 ohm. 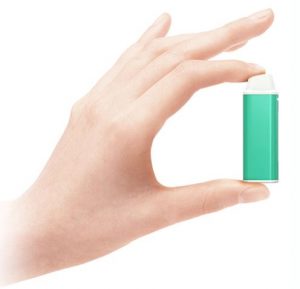 part of the mod. It is so convenient you could even use your laptop to power it up. Eleaf iCare is not a complicated device at all. In fact, it has no buttons to press. So if you want to use it, just take a draw and it will automatically activate and produce a maximum power output of 15 watts. It is quite responsive too!

While this device is already a perfect on-the-go tool, it is a noisy vape. When taking a drag, it crackles and makes a bit of racket; however, this eventually settles down after breaking in the coil. So whether you are bound to experience this or not, I think this should still be corrected or improved.

For a fair warning, the new Eleaf iCare is not designed to be a cloud device, even though it gives off a good amount of vapor. Its draw is tight, and it is spot on for mouth to lung vapers. The flavor it produces is pretty lackluster despite being open or closed off. So unless you are chasing for flavor or cloudage, this device is meant only for those with rather simple needs. Its small size also limits its e-juice capacity, but if it is okay with you to keep an extra unicorn bottle handy, it won’t be an issue.

Appearance-wise, the mod looks clean, sturdy, and interesting. It has an airflow controller, but you need to take off the mouthpiece and unscrew the chimney to adjust. However, refilling it is a no sweat task, just make sure you don’t go beyond the fill-limit line.

The coil heads for this kit a 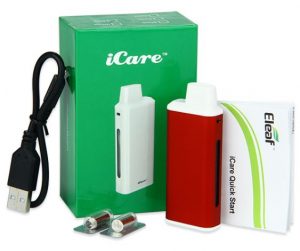 re okay. The vapor volume was good even with a small coil head. Although the wick holes were tiny, they wick well. They were designed in an alternating up and down position, a pretty good idea to make sure the top and bottom portions are really saturated. They work just fine, but it would be better if the juice ratios used are under 70% vegetable glycerin (VG). That being said, e-liquids like the Caktus Juice is a perfect pair for this beginner kit. It has eight fruity, dessert flavors to choose from including Berry Crunch, Tangy Grape, Strawberry, Tangy Apple, Watermelon, Strawberry Cream, and Pineapple. You can grab and enjoy a 30-ml bottle of these mouth-watering blends for as low as AUD $15.95 at Caktus Vape. Of note, when using medium to high strength e-liquids, iCare perfectly recreates the sensation you are used to.

The Eleaf iCare Kit is perfect for traditional vape pen users. You could grab this for the lowest price of AUD $16.95 at https://caktusvape.com. Colors available for the mod are black, white, cyan, red, and gold. Included in the kit box are an iCare mod, two IC 1.1 ohm coils, a user manual, and a USB cord.

Did you find apk for android? You can find new Free Android Games and apps.
Share 0