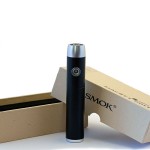 A Quick Look at: The Magnet Bolt

This is a Magnet Bolt; and before we get to talking about anything else I need to clarify that it’s not my Magnet Bolt but a loaner from a friend that was nice enough to part with it for the purpose of a review (thanks babe). As such I’ve only had a week with it and have had to be more careful than I usually would.

Now, lets get to it. The Magnet Bolt (as Smoktech calls it, or the Magneto Bolt or even Magnetic Bolt as everyone else is calling it) is exactly like the “regular” Bolt except in every single way. In fact this is as close to the Bolt as I am to Halle Berry. It has an eGo connector instead of a 510, a magnetic button instead of an electrical one, a 18650 tube instead of 18490 and it’s got different aesthetics, weight and size. For all I know aside from the name they only share the tube with a side button design with the original Bolt. In the looks department it’s very similar to the SID/ACE instead of the Bolt in fact.

First thing that really grabbed my attention was that the Magnet Bolt is anodized inside and out; which is something that would have really worked for me a while back. Now, given my adoration of the kick (kick2 to be precise) it doesn’t make sense. Anodized aluminum is non-conductive, meaning that the Magnet Bolt will not ground a kick module and hence won’t work with one. This in the day when variable voltage/wattage devices can be purchased for under $50 really makes me scratch my head. If this was an otherwise exceptional device and/or if this was a time before the kick made it’s appearance I wouldn’t mind, but it’s not.. and this is from a company that not only knows of the Kick but makes it’s own shitty version. Take the REO Grand as a case and point. It was produced way before the Kick and is still so well loved that vapers don’t mind taking the time and effort to sand a bit of the inside so they can fit a kick.. this will not be the case for the Magnet Bolt because it’s simply not worth going through the steps. Perhaps realizing this Smok is releasing a little “kick” extension ring and a Stainless Steel version that won’t suffer from the same problem.

Secondly, the button, we need to take Smoktech’s word for it being magnetic since there’s no way of checking without taking a pair of pliers to it. Given that this is not my device I won’t be doing that but that’s another story. What’s annoying is the fact that they “sealed” it. A mechanical or magnetic device has the benefit of practically never breaking down given a little TLC.. this cannot be achieved if the switch is not accessible for a clean.
So, what happened here? As I can only deduce SmokTech must have liked the reception (read sales) the Magneto had and decided that everything needs to be magnetic. So they came up with new mods like the Smooth, the Galileo and the Turbo that have the same button as the Magneto.. and then decided to add Magnetic buttons to pretty much everything else they had so now we have the Magnet Sidewinder, Magnet Natural and this, the Manget Bolt.
Overall?

For me it’s a plain mod with an uncomfortable button at not exactly the best price, that will require accessories and/or work to give me the vape I like. Maybe for someone looking for a simple unregulated vape it will be a good fit, different strokes for different folks afterall.

How to Clean Your Old Cartomizers