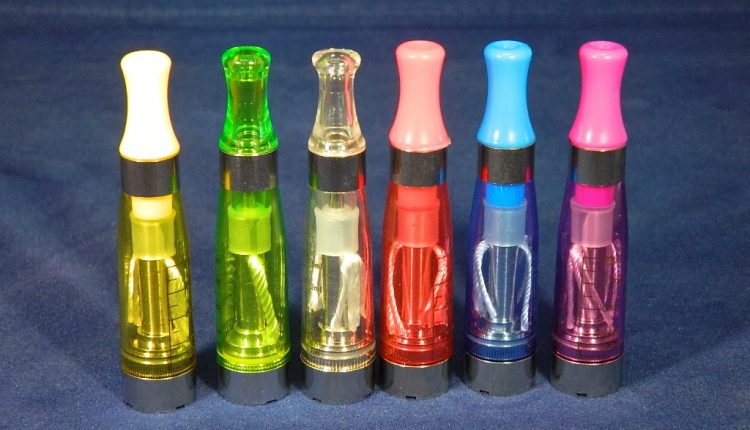 I like the carrying case as it’s quite a bit bigger than the carrying case that Volcano offers for the Inferno e-Cig.It comes with the kit whereas Volcanos Inferno case costs extra. I’ll be comparing the Envy Ego-Tank vs. the Volcano Inferno a bit later in this review.

Each Envy Ego-Tank battery is black in color and with a manual button that lights green when you press it. In keeping with the overall color scheme, the tanks are also translucent green plastic. The idea, of course, is that when your friends see you vaping your Envy e-Cig instead of smoking a cigarette, they’ll be green with Envy.

The Ego-T is also known as the Riva-T. It has become one of the most popular electronic cigarettes on the market today. Its tankomizer system holds lots of e-liquid and works quite reliably. A refill tank holds a little over 1 ml of e-liquid, and an additional small reservoir inside the tankomizer holds another .3 ml or so. The high capacity means that you’ll most likely be able to use the Envy Ego-Tank for a full day between refills unless you are a very heavy vaper, in which case a mid-day refill should suffice.

Each Envy Ego tankomizer has a semi-hollow cone shape. If you look inside, you will see a small hollow tube, while the bottom of each tank has a silicone cap with a hole in the middle. When you push the tank into the tankomizer, the tube goes inside the hole at the bottom of the tank.

Instead of a constant drip of e-liquid, which can cause leaking, the Envy Ego-Tank relies on the vacuum that you create when you puff on the e-Cig. This causes just enough e-liquid to flow from the tank to the heating coil, where it is vaporized. The rest of the time, you can happily walk around with the Ego-Tank in your pocket, and never have to worry about leaking.

The Envy EgoTank has an eye-catching black and green color scheme.

The Envy Ego-Tank may look like a complicated electronic cigarette at first, but you’ll quickly find that it’s quite simple. When you open your first pack of refill tanks, you’ll find each one individually wrapped in clear plastic. Inside the carrying case, both of your Envy e-Cigs will be inside their holders with empty tanks installed and the safety button protectors in place.

Before beginning, pull the vacuum tank out of the randomizer and remove the switch cover. Unwrap one of the pre-filled tanks and pull the long soft plastic cover off the end. You will see a smaller silicone cover over the opening of the tank. Leave this in place. Push the tank straight down into the opening at the top of the randomizer. This opens the silicone cover, allowing e-liquid to drip down to the heating coil.

Envy EgoTank after unwrapping and filling

Don’t use the Envy Ego-Tank immediately, The first time you use it, you want to puff on the mouthpiece gently a few times without holding the button down. This is similar to priming a pump. It starts the drip of e-liquid that will keep the heating coil in the atomizer wet as you use the electronic cigarette. After you’ve done this, you can begin using the Ego-Tank. When you want vapor, hold the button down and draw the smoke into your mouth through the mouthpiece. If you’ve never used an electronic cigarette before, pretend it’s a real cigarette with a button. You can draw smoke into your mouth before inhaling it, or if you prefer, draw smoke directly into your lungs.

Because the tanks for the Envy Ego-Tank are translucent, you can easily see when it’s time to refill them. Simply turn the e-Cig so the mouthpiece faces down and all of the e-liquid will flow down. If you can’t see the e-liquid or only see a little, pull the tank out. If you have more pre-filled containers ready, you can just put a new one in. If you don’t, you can refill an empty tank with any e-liquid you like.

To refill a tank, turn it, so the mouthpiece faces down and removes the silicone cover from the bottom. Add your favorite e-liquid from a bottle, leaving a bit of space for air at the top. Replace the lid and push the tank back into the tankomizer.

The first thing that I noticed when I used the Envy Ego-Tank for the first time is that the tankomizer is completely silent. I’m used to new atomizers crackling and popped a bit, but this one makes almost no noise whatsoever. At first, I was afraid that it wasn’t working, but no it produces an excellent amount of vapor for a mid-sized electronic cigarette, and just as much as the Inferno e-Cig. The Envy tankomizer is incredibly easy on the battery. The smaller battery is ideal for a long day out of the house, and at home, the large battery should easily go a full day without dying. The Ego-Tank is also perfect for anyone who prefers a cooler vapor with a less intense flavor; with this tankomizer, stronger e-liquids don’t become overbearing with extended use. When a battery dies, charging it from a USB port or wall outlet takes just a couple of hours.

The Envy Ego-Tank kit comes with two tankomizers, so it will be about two months before you need to start thinking about a replacement. Envy charges a reasonable $12.95 for each replacement tankomizer, and extra 1000 mAh batteries cost $14.95 each. You can refill your empty tanks many times before you need to worry about replacing them. When you do want to buy empty tanks, they cost $4.50 for each five-pack of empty containers or $14.95 for each five-pack of filled tanks. Alternatively, Envy also sells e-liquid by the bottle. Envy has 18 different flavors available, costing $12.95 for each bottle. If you prefer another e-liquid, you can fill the empty tanks with any e-liquid you like.

Among companies selling electronic cigarettes with the same design as the Ego-Tank, Envy’s stiffest competition comes from the Volcano Inferno e-Cig, a product that I’ve strongly recommended in the past. Because Envy Ego-Tank Premium kit costs about 33-percent less than Volcanos before you apply the Envy coupon listed at the top and bottom of this article I have to say that the Ego-Tank is now the e-Cig to buy in this price range. However, there are a few differences between the products that you should be aware of, as they may influence your purchasing decision.

The Envy Ego-Tank and the Volcano Inferno starter kits

Items included with the starter kit: The Inferno e-Cig kit comprises three items that the Envy Ego-Tank kit does not: a USB battery, a carrying bag and a 15 ml bottle of e-liquid. The e-liquid and carrying bag are inexpensive enough to be inconsequential, so the primary feature that you need to consider is the USB battery. The 650 mAh battery included with the Inferno e-Cig kit has a USB port on the end that allows it to act as a pass-through device. If you encounter a situation where both batteries are dead, you can connect the Inferno battery to your computers USB port and continue using it. The Envy Ego-Tank does not have this feature.

The Inferno e-cig has a painted enamel design, which looks nice but chips over time. My Inferno which I used faithfully for at least a year is now looking a bit worn out. The Envy Ego-Tank has a solid color and a slightly rubberized texture.  Although the battery can be a bit of a fingerprint magnet, it appears that it will wear a bit better over time. Also, the tanks for the Ego-Tank are slightly rounded, while Volcanos Inferno tanks are flat. I think that the Ego-Tank feels much better in the mouth.

Although it has never been a problem for me, some users have complained that the tank on the Volcano Inferno will occasionally leak. When it does, something strange happens with the vacuum inside the tankomizer, and the Inferno dumps all of its e-liquid on your hand. The Inferno Tank has a hard plastic cover, while the Envy Ego-Tank has a soft silicone one. The Inferno tank also has a slightly larger opening at the bottom. I feel that the silicone cover on the Ego-Tank might be more resistant to leaking. You should be able to store it in your pocket without risking an accident. I’ve been walking around with the Ego-Tank in my pocket for several days and had yet to experience a problem.

Overall, I think that the Envy Ego-Tank is a very solid product. At $49.95, the Premium Kit offers significantly more than Volcanos Inferno e-Cig kit, and at a much lower price. If you’re on a tight budget, Envy also offers an Economy Kit for $34.95 that includes one 650 mAh battery, one atomizer, USB and wall chargers and two packs of five refill tanks. To make things even sweeter, if you click any of the Envy product links in this article and use the coupon code edripping, you’ll get 25% off of your order. I know of no other electronic cigarette that competes with the Ego-Tank in this price range. I wish I had known about this kit when I first quit smoking and switched to best e-cigarettes.